My brief remarks to the Kern County Board of Supervisors follow, but they would have been much different if it had been a day later, April 6, 2016, when we lost the true Poet Laureate of Kern, Merle Haggard, who died that day on his 79th birthday.

Nevertheless, here you go (and many thanks to the members of the Arts Council who made this all possible):

If Johnny Carson were still alive, he would die laughing about that.

But megalopolis has never acknowledged us.  In fact, poetry and all of the arts have always thrived here. Not only are many musicians in prominent rock bands from Bakersfield and Kern County, not only did we produce the Bakersfield Sound that Gerry Haslam and Bob Price have written about with such affection and respect, but we’ve maintained a symphony orchestra for almost 85 years and have always had a lively jazz scene (including Doug Davis’ festival) with many excellent musicians, some of them refugees from the big city, sick and tired of it.

When I was a boy, I went with my mom and dad to the Pumpkin Center Barn Dance.  As a teen jazz fan, I saw famous names play at the old Hacienda on South Union.  For some reason, they let us in back then even though alcohol was served.  And we also hung out at the Sunday afternoon jam sessions at the Bamboo Room on East California.  It was housed in a Quonset hut that my dad and some of his friends had built as a clubhouse after the war—a lodge comprised of China-Burma-India vets and called (who remembers why) the Boo-Hum-Dit-Dum.  Big world.  Small town.  And how about gospel music?  For years, I’ve been familiar with names like Gholston and Factory, and whenever the choirs come out of their churches, they draw a big crowd.

Painters, weekend and full-time, who have always been hard at work in their garages, have finally begun to sustain a number of truly interesting galleries and, of course, the BMA.  We’ve had a community theater for almost 90 years.  I remember when I was attending Bakersfield College in the sixties, there was a fascinating production of Shakespeare in Kabuki style.  I think Robert Beltran was involved in that.

The writers have always been scribbling away, too.  Writers of Kern remains active, a deep and strong organization.  And Portia Choi’s First Friday Open Mic at Dagny’s is beginning to reveal some impressive new poets.

Me?  I’ve been hard at it mostly right here in the Southern San Joaquin for over fifty years, writing poetry mostly about this place, which I love.  At this point in my life, I’m grateful for being selected as the first poet laureate of Kern County.  As Merle Haggard said when CSUB gave him an honorary doctorate, “It’s nice to be noticed.”  Then he snuck out the door and got back to work.  Which I intend to do also.  However, I do hope to use this honor as an opportunity to bring some poetry appreciation into high school and college classrooms.

Bottom line…  The arts are doing well in Bakersfield and Kern County as they always have.  And we don’t need Los Angeles any more than Buck Owens needed Nashville.

Thank you very much...

And thank you, too, Mr. Haggard! 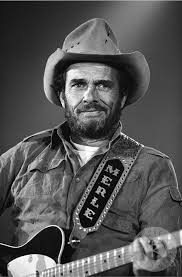